Aged 20, part way through Uni studying for a Bachelors in Psychology I started my Dissertation. We had chosen a topic our favourite lecturer had put forward. Unrealistic Optimism in Infertility.

Essentially, the concept that “it’ll never happen to me” contributing to women, who now had potential careers and ambitions, delaying motherhood whilst risking infertility. The irony was not lost on us, but we were still only 20 (granted, past the peak age of fertility already…) and full of ambitions to radicalise the various divisions of psychology that excited us. Motherhood, and the 30-35 fertility drop off seemed a life away.

I’m now 28, a month shy of 29. The irony is really not lost on me now. My first appointment to embark on motherhood was December 28th, 2012, age 25. A few months before, in September, we went to the Alternative Parenting Show in London. It was our first outing as wannabe parents. We were excited, curious. Naive.

I remember people from the   clinic we ending up going to telling me “oh, you’ll be fine, you’re young and healthy”. I also remember not wanting to pursue another clinic who didn’t do any ‘natural’ IUI cycles – I wasn’t infertile, just lacking in sperm after all. 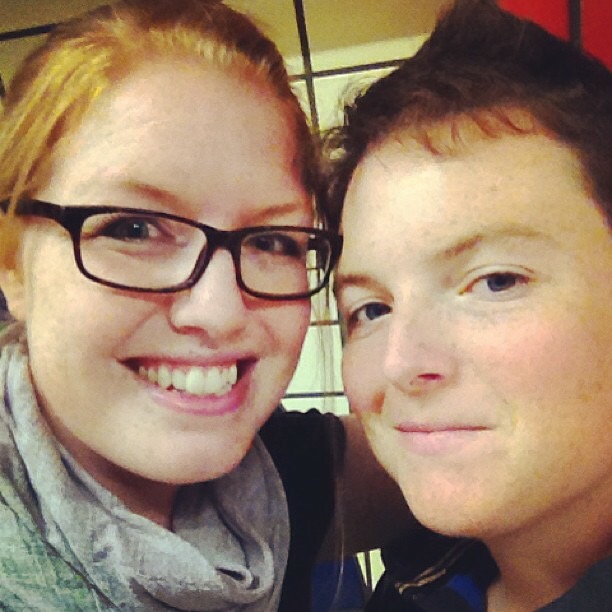 This is us, on the tube, following our first round of IUI at a clinic in London. What I see in these eyes is the cheeky knowledge that we’d just done something no one else knew about. And OPTIMISM.

Unrealistic optimism, hindsight would tell us. And to be fair, I have always been pretty cynical, even then. I remember insisting that we had to save enough for the initial three cycles – despite them telling us, you’re young and healthy, you probably won’t need three. I wanted to make sure we were covered, just incase, – after all how did they know how healthy I was? I’d never even tested my fertility. And even then, my BMI was on the slightly high side – the only indication of my health that they even had. We figured if we saved enough, even if we got to the second cycle, we’d have money saved for a pram. Again, OPTIMISM. Unrealistic optimism.

I never thought we’d get to IVF. I never considered myself “infertile” – and in theory there is nothing to suggest we are. We still haven’t got to the magical sixth cycle that would classify us in the same comparison as a straight couple attempting to get pregnant for sixth months. Leo was our fifth cycle. Our second IVF. I don’t know how we get classified now, after all we successfully had a baby and carried til term. But he died. The future for treatment would now probably take us to FET, for there are two tiny blastocysts – Leo’s siblings – sat, waiting. IUI. IVF. Stillbirth. FET. Baby?

I’ve always wanted a career. I’ve always wanted to change the world. Two degrees later, and all I want now is to change our world. A career doesn’t seem too crucial anymore. A job seems more a means to an end. Pennies for our pile, to help us create a family. A bigger family than the three of us. For Leo will always be apart of it – if we ever get it.

And for optimism vs pessimism? I’ve done both, in equal measure. I guess optimism is still the way to go. At least you can smile and dream on the journey. No matter how long and turbulent it is…